On Saturday 7 August the Royal West of Scotland Amateur Boat Club welcomed 7 other rowing clubs to our Club for a Coastal Rowing Regatta. The other teams in attendance were Arran, Carrick, Cumbrae, Prestwick, Royal Gourock, Royal Northerm (Rhu) and Troon. This was the first Regatta that Royal Northern and Royal Gourock have ever attended.

Each Team participated in 6 races. The races were 500m sprints along the Greenock Esplanade.

The Events and placings are shown in the Table Below.

The Royal West provided hospitality. The proceeds from a raffle and the sale of teas, coffee and home baking raised around £500. £250 will be donated to the RNLI and the remainder will be used to support the attendance of the Royal West Team at the Skiffy World Championship in the Netherlands in June 2022.

Karyn Donnachie, RWSABC Rowing Convener said – “It was brilliant day thanks to all the visiting clubs, the Royal West rowers and members involved. Together it made for a fun competative costal rowing regatta”

A Royal West Member participating in her first regatta said – ‘Loved my first Regatta, it was a great day. Thanks to everyone at the Club for making me feel so welcome!’

A rower from Arran Rowing Club said – “Thank you for all your hard work and organisation. As always there was a lovely atmosphere, and the regatta was well organised. It was super to see new clubs out on the water and meet new people.”

An Invitation to New Rowers

The Royal West is encouraging everyone to try Coastal Rowing. We have a Novice Night on Thursday evenings. Please make contact with the Club via our website. 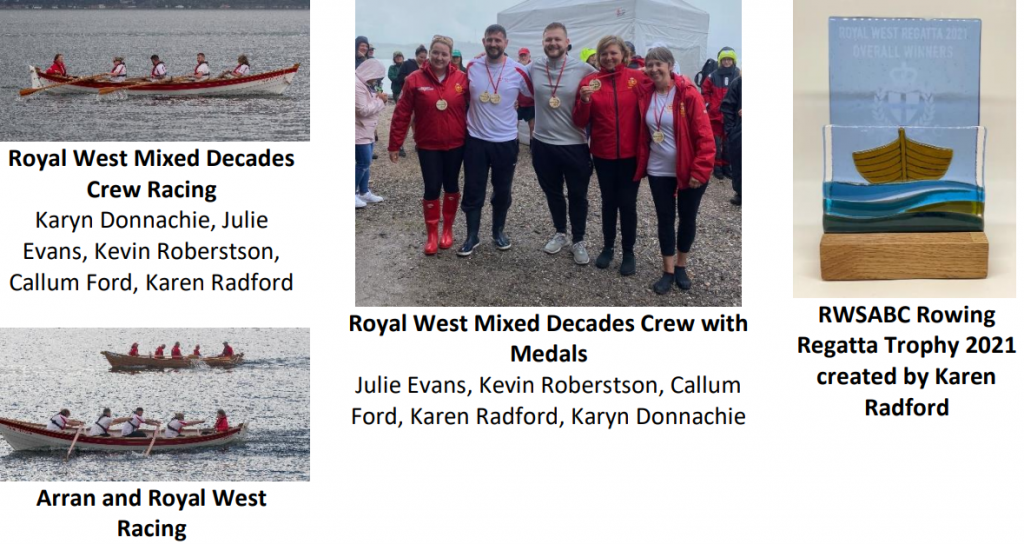